Manta on her way to Chile is the name of our blog. Why Chile and Patagonia? On our previous trip (s/y Kristiina 2001-05) we planned to sail there, but went to Alaska instead. Now we have another boat, but still the same passion for arctic nature, environment and landscape.

Check the routemap on the REITTI page.

We left our homeport Helsinki in May 2012, and sailed (or motored!) across Russia via the inland waters: River Neva, Lake Ladoga, River Svir, Lake Onega and the Stalin Canal. Manta came back to salty water up in the White Sea. This was a three week convoy organised by RusArc, and we had great time with eight other boats from different countries. There is a blog, but only in Finnish, sorry.


From Arkhangelsk we sailed 500 nm to Norway (Kirkenes), and from there up to Svalbard. We were able to sail around the Spitzbergen Island, because there was not much sea ice.

Manta was left to Tromsö for the winter, and we were working at home. On June 2013 we started from Tromsö the voyage down to south. In November same year we arrived to the Canary Islands, where we spent several months, visiting Finland a few times including a 2,5 months stay during the summer.

On the 30th of August 2014 we started the Atlantic crossing. It took us 6 days to sail to Mindelo, Cap Verde Islands, where we spent a week. After some really hot and lazy days it was time to continue. Now we had over 2000 nm to go. We were aiming to Rio de Janeiro, but was forced to Salvador by a frontal system. After 17 days and 2320 nm we tied up in marina Terminal Nautico, Brazil. It was 1st of October.

The coast of Brazil is long and there is lot to see: Abrolhos Islands, Rio de Janeiro, Paraty - to name a few. We liked Ilha Grande area best, and stayed there for a couple of weeks.
After 2,5 months and about 1800 nm we left the big country and arrived to Punta del Este, Uruguay. Christmas was spent in Piriapolis, and New Year on the other side of the La Plata Bay (or river) in Buenos Aires, Argentina. After five expensive days in the city centre marina Madero we moved to Barlovento YC, located further up in La Plata river.
The delta of La Plata is the boating hub of Buenos Aires. We took Manta up to change the foldable propeller for a fix blade one. It was efficient and inexpensive one-day job.

From Barlovento we sailed to town of La Plata (not to be mixed to Mar de Plata) to wait for a weather window to sail south along the Argentinian coast. On the 21st of January 2015 we started the long way down. We stopped in Puerto Madryn for two nights to wait a front pass. From La Plata to Madryn it is 750 nm and it took us 5 days. The weather was good all the way, easy sailing. After Madryn we continued south stopping in Puerto Elena and Caleta Horno, both good anchorages with excellent hiking. It was jouyful to reach Patagonia with plentiful of penguins and marine mammals, as well as the shy guanacos and rheas.

Then we sailed to Puerto Deseado (arr 4th of Feb), and stayed three weeks. There were three reasons for the long stay: my cousin joined the crew, we changed the rubber bearing of propeller shaft, and waited for good weather. Finally, on the 27th of February we cleared out from Argentina after two months stay. We  had a nice sail from Deseado to Cabo Virgenes.

The Strait of Magallan was less nice, we had 40-50 knots almost on the nose for 25 hours during the whole 100 nm to Punta Arenas. But we were lucky with the current: we didn't have to wait to pass the narrows - partly thanks to 0,5 knots we had made earlier!

On the 2nd of March 2015 we cleared in to Chile. The stay in Punta Arenas was brief two nights because of the coming 50-knot wind. On the 18th of March we arrived to Puerto Williams after pleasant and interesting two weeks in the channels. Sometimes it was blowing hard, but there are excellent anchorages where we stayed put.

The plan was to sail in the neighbourhood of Puerto Williams during the austral autumn, but Micalvi was full and we were afraid to lose the winterplace. There is no reservation system. So instead we explored the surroundings by foot, which was better for our health. There are numerous different paths, and we enjoyed the nature and hiking a lot. In May we flew to Finland and Manta was left alone to Micalvi. We returned in the last days of August to find everything ok onboard. In September there was still snow, so that we got a mini-winter, which was very nice. 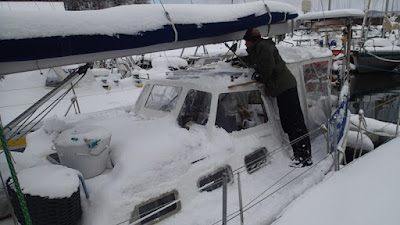 In October 2015 we crossed the Beagle Channel to Ushuaia and hauled-out Manta in Afasyn. After a week on hard the work (changing shaft rubber bearing and bottom painting) was done. The rest of the spring and early summer we sailed on both sides of channel and had also friends from Finland aboard.

On January we were ment to sail to Antarctica. Tthe plan had taken a year of intense planning and preparation beginning from the permit to various practical matters. Our friend Jorma arrived just after Christmas - we wanted crew for this trip. El Niño made the January 2016 weather very odd. Huge weather systems created a constant flow of headwinds over Drake Passage. There was a lot of ice in Antarctic Peninsula. Finally, on the 20th of Jan. we were on our way to south. We stopped in Puerto Toro to wait a couple of days for the weather window, and then it happened. Our autopilot was not working anymore. The problem was located to the bypass valve. We ordered a spare part, and it was due to arrive in 3-4 weeks. This ment that Antarctica was closed for us in this season. We were smashed. We started to look for alternatives, would there be a way to go on cruise ship or charterboat? Antarctica was the dream no 1, secondly came the achievement to do that on your own keel. We were lucky: Pelagic Australis was just leaving for it's second trip of the season and had place for three. Hannu and I took the opportunity, Jorma chose not to. We had a great, relaxed trip with interesting, nice people and professional, pleasant  crew. The whole thing couldn't end any better! When we returned in he end of February, the spare part was waiting us. Now we are ready to move on. Rumbo norte! Pacific is waiting. But first some thousand plus nautical miles and several months on Chilean channels.

Our aim is to sail and live this life as long as it feels good, and also so long that we don't have to start a third trip. Getting off the rat-race is more demanding than keeping up this way of life. And for the non-sailor readers: this is a way of life, not a holiday or adventure.

Auli continues to work as a boating journalist, only the subjects are a bit different than back in Finland. She has been writing for the Finnish Vene Magazine since 1996. Hannu is a plumber, and his one-man company is waiting for our return.


You can follow our sailing here with little notes in English.